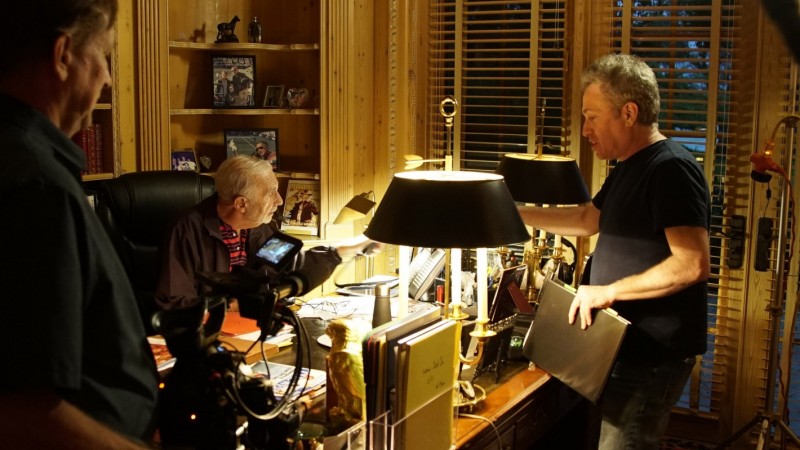 Ten years ago, Bruce David Klein ’85 visited the Binghamton University campus as a guest lecturer for the film department. He explained to the students how the company he founded, Atlas Media Corp., became one of the largest producers of non-fiction television in the United States, and how he wrote, directed and produced a range acclaimed documentary films.

Alex Goldstein ’12 was nearing graduation. As a film student, he had discovered a love for non-fiction storytelling and wanted to break into the industry. He and Klein briefly hooked up at the University’s public relations office (where Goldstein was intern), and then Goldstein boldly followed Klein and his wife to the elevator to argue for any available jobs.

If this was a cliché moment from a Hollywood script, Klein would have taken a chance on the kid and hired him on the spot. Instead, they saw each other again six months later in another elevator in the Atlas Media offices in New York.

“Yeah, I remember that,” Klein replied. “So what are you doing here?”

Goldstein smiles. ” I work for you now!” He’d made his own connections at Atlas Media and landed a behind-the-scenes role at Hotel Impossiblea production for the Travel Channel.

Among several other projects since then, the duo have worked closely together on Icahn: the restless billionaire, airing this spring on HBO. The documentary profiled Wall Street titan Carl Icahn, the activist investor – or corporate raider, depending on your opinion of his tactics – known for his deals with Tappan, Texaco, Apple, Trans World Airlines and other big companies.

The film received similar critical acclaim to Klein’s high-profile documentaries Meatloaf: In Search of Heaven (2008) and The worst thing that could have happened (2016), about the original Broadway production of Stephen Sondheim’s musical We ride happily.

Founded by Bruce David Klein ’85 in 1989, Atlas Media Corp. produced a variety of non-fiction television programs. Among its many programs are:

Bruce, how did Binghamton influence your career as a filmmaker?

KLEIN: When I was young, I made amateur films and I was always obsessed with cinema. I majored in creative writing and psychology, thinking I would be a psychologist. In my second year, in the basement of Union, there was a sign that said “Harpur Television Workshop”, but I never saw anyone inside. I asked a guard to open it, and it was like a scene from a movie. There were cobwebs on the giant black-and-white cameras of the 1960s, and rows and rows of giant mixers and switchers and all that very old equipment. I’m not a technical person, but I saw this button that said “on” and I literally activated it. The whole workshop comes alive.

I started making these shows available to the public. i was a avant-garde filmmaker, kind of more artistic stuff. I remember doing a documentary on the Hari Krishnas in Binghamton. Because I was also a musician, my friend and I did this performance piece which culminated with me playing a song on the piano and turning it on.

The time I spent at the Harpur Television Workshop usurped the time I spent applying for graduate programs in clinical psychology. I realized I wanted to communicate on a larger scale – shaping millions of minds at once rather than one at a time.

Alex, you were in Binghamton more recently than Bruce. What was your experience?

Goldstein: I went to college thinking I wanted to be a filmmaker. After my first film lessons, I thought maybe it was a bit too experimental for what I was looking for, so I stayed minor in film but decided I wanted to become a lawyer.

Since I was doing pre-law, I joined an acapella group on campus and did all the videos for the group. We made these Saturday Night Livestyling sketches, I did them, and I was getting really good at it. After a while, I thought, “I don’t want to be a lawyer. I have a lot more fun making this kind of film. Let me see if I can major in film. I barely graduated on time!

I loved being part of the movie community in Binghamton. I loved being in that conference room basement. You felt like you were doing something different from everyone else on campus.

What attracted you to documentary cinema?

Other graduates are making their mark as producers

Keith Hurd ’88, who teaches Broadway marketing and theater business at Binghamton, won an Emmy Award and a Clio Award; the first, in 2021, was for its production of Broadway Profiles with Tamsen Fadal and the second was for an immersive Van Gogh exhibition in New York.

Madeleine Smithberg ’81major in art history, co-creator The daily show and served as an executive producer from 1996 to 2003; she won Emmy and Peabody awards.

GOLDSTEIN: I thought the originally scripted projects were unattainable. I started experimenting with documentaries and fell in love with the process. I did a project in my senior year at Binghamton that traced my family line. It was the first time I saw the magic of this medium.

KLEIN: Take the craziest, most outlandish movie and compare it to real life – it doesn’t compare. One of my favorite movies is A clockwork orange, which is wild, unusual and strange. We’ve seen things 10 times crazier in real life.

Additionally, Atlas Media began at the dawn of non-fiction, unscripted television. Before that, the only time you saw a documentary was on PBS. Then MTV did documentaries, the History channel was created, the Discovery channel was created – there was this golden age of non-fiction, unscripted programming that still happens. Ten years before I debuted, you might be able to pitch a documentary at PBS or do one at a film festival, but you wouldn’t get a wider audience. Today people talk about shows like tiger king and Making a Murderer. They are in tune with the times.

Basically, what is the role of the producer? And how does it fit into the overall hierarchy of a TV show or movie?

GOLDSTEIN: With documentaries, the producers are the people who do everything to make it happen, they get their hands dirty, make sure everyone does what they have to do and that the interviewees are happy. You are a kind of Swiss army knife of creativity and mechanical know-how: writer, logistics manager, sometimes technical supervisor.

KLEIN: Each production is a war. It’s a battlefield, and you get shot by an enemy. They use guns. They use grenades. They sometimes use a nuclear bomb. Your goal as a producer is to avoid them – and if it’s impossible to avoid them, then to improve the consequences.

Everything in the universe tells you that you can’t do it. It’s the producer’s job to not only say yes, but we’re going all the way and we’re going to do it, because that’s the only way to do the productions.

For the documentary on Carl Icahn, he had to be convinced to participate. How do you handle reluctant subjects?

KLEIN: Every subject is reluctant, and for an obvious reason – no one wants their private life and thoughts broadcast to millions of people without some control over what they say. The documentary filmmaker’s trick is to find a way to capture the truth and make the subject feel very, very comfortable.

With Carl, because he’s a high-profile, very public multi-multi-multi-billionaire, and because he’s infamous for his tough negotiations, he sees everything as a negotiation, including whether he should be in a documentary or not. He was convinced that a documentary capturing the history of his dealings would be good. But when people see him making a billion dollars by closing a deal, the natural and curious question of a documentary viewer is: What makes him so? What is his unique DNA that makes someone like him capable of doing this? You have to show his childhood, you have to show how he is today and how he leads his life. He was less convinced on that side.

When you’re in Carl’s presence – and hopefully in the film as well – you get the feeling that he’s a truly unusual spirit telling you exactly what he’s thinking at any given moment. . And if he’s not, he’s calculated what he’s telling you in a way that also reveals his personality. As a documentary filmmaker, your job is to reveal the person.

Alex, what did you learn about documentary filmmaking working with Bruce?

GOLDSTEIN: Bruce talks about the difference between poetry and prose, which I always thought was a profound way to talk about documentaries and what we’re trying to do. We go beyond journalism and create a kind of poetry with the films we make.

KLEIN: One thing Alex understood right away was that every documentary has its own path. The subject and the world you are in speaks to you, and it tells you what it should be. All of the movies that we’ve made — our Sondheim movie, our Meat Loaf movie, our Icahn movie, the one we’re working on right now — go their own way and come out differently, because the material is so different and the process is different.

What advice would you give to current and future students who want to pursue a career in film and television?

GOLDSTEIN: The hardest part is making the decision. Once you have decided, use all the tools available, tell everyone this is what you want to do and this is what you are going to do, and the universe will conspire for your success.

KLEIN: Carry the scrappy, hard-working spirit of Binghamton into everything you do in your career, and I guarantee you’ll succeed beyond your dreams.