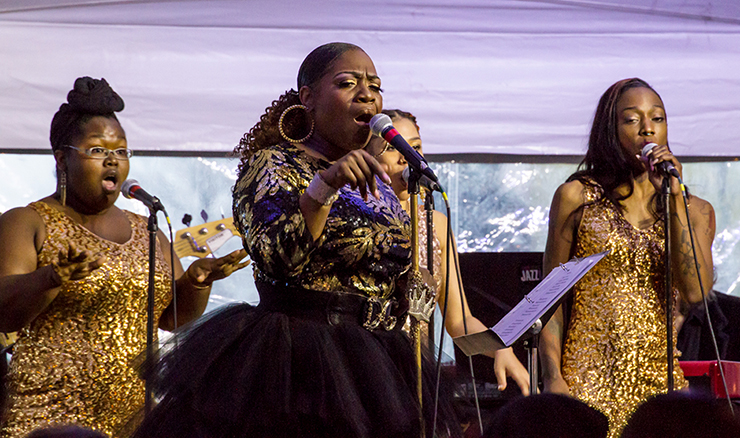 Getting to his table was a bit tricky: entering through the front door, checking in, passing the coat rack, going down a few steps, going left, waiting through an exit for someone to come and lead you outside along the ‘a way and in a big tent. Once inside the tent the air was cool. The new radiator was not working. But the tables were filling up for what would be a sold-out show. People were talking, putting glasses to their lips, looking at menus. The waiters crept in.

I felt like I was in a dream. Your first adventure in a live public event, if you haven’t already, might feel the same. After more than a year of lockdowns and quarantines, we are all bears emerging from our dens. We are bats, box turtles and bumblebees emerging from their hibernation to a place where an alien, mask on face, notepad in hand, stands next to you and asks, “Are you?” ready to order? “

Last Friday night, it was the inauguration of the Belvedere, the last outdoor space of the Crooners, a double marquee of 150 places with a floor, a real stage, a sound system, lights, tables and chairs, and it was grandiose. It was fun, it was festive, it was totally live. It was the most recent phase of the Fridley club’s plan to keep music live, even during a pandemic.

When you want to open in a way people will remember, call Jamecia Bennett. Dressed in sequins and a cloud of black tulle, followed by a trio of gold-clad backing singers, the powerful singer and three-time Grammy winner took the stage and christened it with “The Evolution of jazz and blues “.

The article continues after the advertisement

Her show was steeped in rhythm and soul, and there was something for everyone: “Summertime” and “Sweet Dreams”, “Fly Me to the Moon”, “My Funny Valentine”, “I’m a Woman â€, Sister Rosetta Tharpe’sâ€œ How Far From God â€. She thanked her cousin, Dennis Spears, for bringing her to jazz. She dedicated â€œWillow, Weep for Meâ€ to Debbie Duncan, her late â€œmusical godmotherâ€ and a frequent Crooners performer who died in December.

Bennett soared and scattered and fell into the black velvet of her low register. During a break, she made a complete costume change. The members of his band – on keyboards, drums, electric bass, saxophone, guitar – all had their own opportunities to shine. His drummer made sure we remember where and when we were in Minnesota during a racial calculation, thanking black women, saying “Being a black man in Minnesota is special” and leading the group to. through a fiery fusion in her song, â€œNot Today, Karen.

We don’t know exactly when the heat came on, but it did. The martinis, made by a real bartender, were cold. The food, prepared in a restaurant kitchen and not packaged for take out, was hot and tasty. And the music was live. You could feel it on your skin and in your bones.

At the same time that Bennett was performing at the Belvedere, Mick Sterling was hosting the newly renovated main stage at the Fridley Supper Club. Early Saturday night, pianist Javier Santiago would perform with his trio in the Dunsmore Hall as staff prepared the Belvedere for Bennett’s return. The place – the three spaces, plus a small sweatshop tucked between the main stage and the Dunsmore, with its own piano – was packed. It’s currently open Thursday through Sunday, with 48 live events already on the schedule by June, including the return of Marilyn Maye for a four-night residency.

V is for virtual, L is for live and in person.

V Tonight (Tuesday April 27), 5:30 p.m .: Rain Taxi: Kim Todd and Kathryn Nuernberger. Todd is the author of Sensational: The Hidden History of America’s ‘Girl Stunt Reporters’, a portrait of pioneering American women journalists. Nuernberger is the author of “The Witch of Eye”, a collection of essays which investigates the horrors inflicted on so-called “witches” of the past. Booklist called it “a poetic and hypnotic trance of a reading”. Both women are on faculty at the University of Minnesota. Free upon registration.

V Wednesday, April 28, 7 p.m .: Minnesota Peacebuilding Leadership Institute: LUNAFEST: Minneapolis. Rated E for Equal, the 20th annual LUNAFEST (and the 2nd virtual) will present seven short films made by and about women. All of this year’s films are documentaries, exploring topics such as women’s perseverance, migration, art, and breaking down barriers. Reception begins at 7 p.m. Your 48 hour screen pass will allow you to see the full lineup until April 30. Proceeds go to MN Peacebuilding’s Racial and Economic Equity Scholarship Fund and community education programs. IMF, trailer and tickets ($ 29).

V and L Wednesday April 28, 7 p.m .: Mizna film series: â€œAl Asleyeenâ€. Since February, Mizna has been programming a different SWANA film each month (yes, they will also be holding their annual film festival). The films are shown virtually and in person at the Trylon Cinema. Directed by Marwan Hamed, “Al Asleyeen” (The Originals) is a thriller about a man in his forties, supporting his family, doing everything right, who suddenly learns that they have all been under surveillance, their most intimate moments filmed. Wednesday at Trylon, 7 p.m .; IMF and tickets ($ 10; COVID protocols limit total seating to 30). Thursday to Sunday, on request: IMF and tickets ($ 8).

Is virtual reality the future of documentary films?