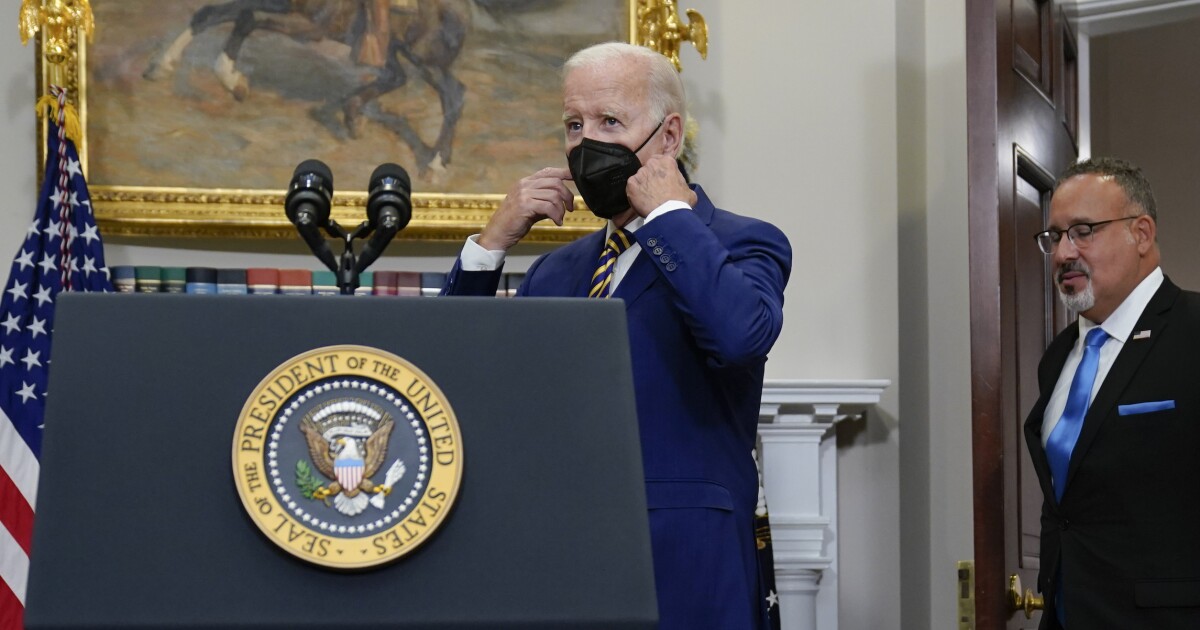 JThe Biden administration has cited the COVID-19 pandemic as justification for its $300 billion student loan transfer program, continuing a pattern of mentioning the virus in some situations and ignoring it in others.

Biden’s education department said the Higher Education Student Relief Opportunity Act of 2003, or HEROES, gives him the power to waive student loans due to a national emergency, that emergency being COVID-19, and Biden was careful to reference the pandemic in his remarks. on the program.

“These targeted actions are for families who need it most — working-class and middle-class people have been particularly hard hit during the pandemic and earn less than $125,000 a year,” he said. .

But at other times during his remarks, Biden spoke about the pandemic in the past tense, saying, “We have responded aggressively to the pandemic to minimize the economic impact of the damage COVID has imposed on individuals, families and businesses,” and later, “We ended pandemic relief programs like Unemployment Insurance and small businesses. It’s time we did the same for student loans. ”

Some analysts said the administration
legal justification
is weak and could be struck down by the courts if someone can prove they have standing to sue.

The OLC memo on Biden’s order canceling student debt is weak. The rationale is the COVID emergency, but it doesn’t even mention the Roberts Court rulings against the eviction moratorium and the vaccination mandate.

I don’t see this order surviving a legal challenge.https://t.co/ePFtkIVJ4M


The White House has argued at other times that the pandemic is over, such as in May when it argued that Title 42 should be lifted for this reason. Masks have not been required inside the West Wing since March, and last week the administration signaled that it would soon stop paying the bill for COVID-19 vaccines, tests and treatments.

A journalist questioned press secretary Karine Jean-Pierre on Thursday about the apparent discrepancy.

“We used the HEROES law because there will be people when we lift the break who will still suffer,” replied Jean-Pierre. “They’re still going to struggle a bit. And so that’s one of the reasons we made this decision.”

At the same time, the Biden administration recognizes the end of the pandemic as an emergency saying this will be the final extension of the student loan payment pause and that payments and interest will start accumulating again in January 2023, nearly three full years after the hiatus. began.

While Biden said “America is
back to work
“, denied that the country is in recession and touted near-record levels of unemployment, Jean-Pierre said that “there are still people who need a little more help. Both can be true.”

Brian Miller, a fellow at the American Enterprise Institute, said the administration was “absolutely” inconsistent in its pandemic policies.

“We are now in the midst of a political convenience emergency, as the declaration of a public health emergency grants the administration powers and flexibilities that it does not want to give up,” said Miller, also a professor of medicine. and Commerce at Johns Hopkins University.

The loan program is for anyone with student debt who earns less than $125,000 as an individual or $250,000 as a household, and transfers up to $10,000 per borrower to taxpayers, or 20 $000 for any borrower who received Pell Grants in college. Its total cost is estimated at at least $300 billion. Some 43 million people have student loans, representing about 13% of the total population.

Unemployment rates soared in the early days of the pandemic, but were much higher for blue-collar workers who had not gone to college. The unemployment rate peaked at 8.4% for workers with at least a bachelor’s degree, compared to 17.6% for those with only a high school diploma. College graduates today still enjoy an unemployment rate of just under 2%.

Biden may be following in his predecessor’s footsteps in using the HEROES Act to act on student loans, albeit at a much different stage of the pandemic. President Donald Trump cited the law to begin pausing student loan payments in March 2020, using the same rationale Biden is now using to support the loan transfer program.

Administration officials also drew an analogy to other pandemic-era programs to justify the cancellation, particularly the Paycheck Protection Program.

“Republicans haven’t complained when some small businesses during the pandemic have gotten extraordinary financial relief without having to repay those loans,” U.S. Domestic Policy Council Director Susan Rice told reporters on Wednesday. again using “pandemic” in the past tense. “Some companies needed it, and some didn’t. It’s the same principle.”

CLICK HERE TO LEARN MORE ABOUT THE WASHINGTON EXAMINER

Yet the PPP was designed from the start so that loans are forgiven in certain cases, which is not the case with student loans.

Critics have said the White House is just moving now to increase voter turnout and push the extension of the final recess beyond the midterm elections, but Biden administration officials insist the fact that the recovery is underway.

“Let’s not forget what happened in the last two years, if you think about the pandemic, how people are still recovering from the pandemic,” Jean-Pierre said. “We’re trying to make sure people still have a bit of leeway, especially as the break is going to be lifted at the end of this year.”