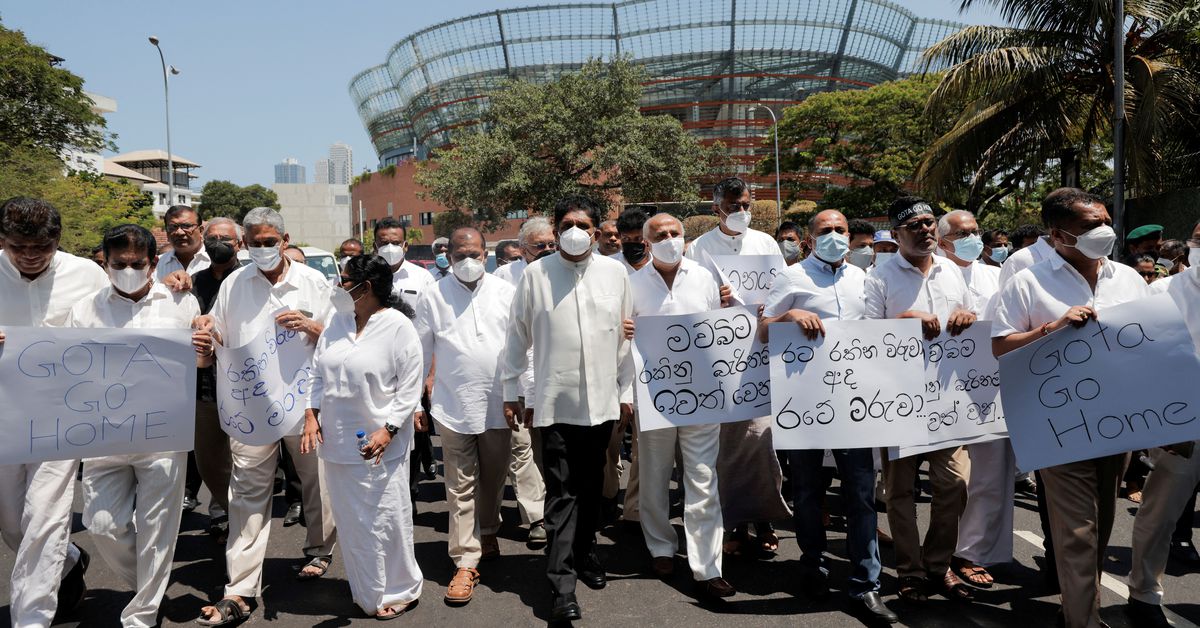 Sajith Premadasa, leader of the opposition alliance, Samagi Jana Balawegaya, marches with other opposition lawmakers towards Independence Square shouting slogans against President Gotabaya Rajapaksa after the government imposed a curfew following a clash between police and protesters near the residence of Sri Lankan President Gotabaya Rajapaksa. during a protest last Thursday, amid the country’s economic crisis, in Colombo, Sri Lanka, April 3, 2022. REUTERS/Dinuka Liyanawatte

COLOMBO, April 8 (Reuters) – Sri Lanka’s main opposition party on Friday called on the government to resolve an economic crisis or face a no-confidence motion, as leaders of companies ranging from garments to tea and other industries have warned that exports could fall by up to 30% this year.

The heavily indebted country has little money to pay for imports, which has led to crippling shortages of fuel, electricity, food and, increasingly, medicine. Street protests have continued almost uninterrupted for more than a month, despite a five-day state of emergency and a two-day curfew.

President Gotabaya Rajapaksa leads his administration with just a handful of ministers after his entire cabinet resigned this week, while the opposition and even some coalition partners have rejected calls for a unity government to make facing the worst crisis in decades.

At least 41 lawmakers left the ruling coalition to become independents, although the government says it still has a majority in parliament. Read more

“The government must tackle the financial crisis and strive to improve governance, otherwise we will propose a motion of no confidence,” Sajith Premadasa, leader of the opposition group Samagi Jana Balawegaya, told parliament.

“It is imperative that Sri Lanka avoids a disorderly default. The government must work to suspend the debt and appoint financial advisers to start the process of debt restructuring.”

Parliament’s work was suspended twice in the morning as rivals heckled each other, with two members temporarily removed from the chamber by order of the president.

Nearly two dozen associations, representing industries that collectively employ a fifth of the country’s 22 million people, together urged the government to quickly seek financial assistance from the International Monetary Fund (IMF), World Bank and from the Asian Development Bank (ADB).

“We need a solution within a few weeks, otherwise the country will fall into a precipice,” Rohan Masakorala, chief executive of the Sri Lanka Association of Rubber Products Manufacturers and Exporters, told a meeting. press conference.

“Our estimate is that exports of goods and services could fall 20-30% this year due to a shortage of dollars, higher transportation costs and power cuts.”

Rajapaksa is struggling to find a new finance minister to talk to the IMF for emergency loans this month, after Ali Sabry tendered his resignation on Tuesday after spending just one day in the job. A ruling party MP said Rajapaksa has not yet accepted Sabry’s resignation. Read more

“We are pushing the government and the opposition to establish political stability as soon as possible and give us a way forward,” Masakorala said. “The IMF should have arrived yesterday.”

Sri Lanka’s foreign exchange reserves have plunged by around 70% over the past two years, reaching $1.93 billion at the end of March. He has a $1 billion debt to pay in July, and later in the year.

Inflation, meanwhile, hit its highest level in more than a decade, and on Friday evening the Central Bank of Sri Lanka is expected to raise its key interest rates by 400 basis points (bp) after a hike of 100bp in early March.

The government has secured billions of dollars in credit lines and currency swaps from India and China, but industry leaders say it needs to do more, urging the central bank governor to begin urgent negotiations.

“The Indian lines of credit will only last until the end of April,” said Russell Juriansz, chairman of the Sri Lanka Shippers’ Council.

“We call on the president to make the right decision or this will haunt him for the rest of his life.”

In addition to importing essential medicines through a billion dollar line of credit with India, the Sri Lankan authorities are also in talks with the World Health Organization, World Bank and AfDB for the drug supply, government health official Saman Rathnayake told Reuters.

Political crisis in Pakistan: Imran Khan ousted, paving the way for a change of power