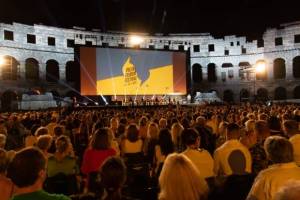 PULA: The 69th edition of the Pula Film Festival (July 16 – 24, 2022) has prepared an ambitious industrial program which will take place from July 17 to 22, 2022. Thirteen feature films and seven series in development will be presented.

The industry program is aimed at film professionals from Croatia and abroad for the purpose of professional networking and education, but primarily for the marketing of Croatian film projects in post-production.

“The central place of this year’s Industrial program is of course Films in the making, where film professionals will present their films as they are to representatives of film distribution: salespeople, consultants and delegates from film festivals. In addition to Croatian majority projects, minority co-productions will also be presented, a total of 13 new projects,” Nataša Šimunov, the festival’s producer, told FNE.

The Croatian Directors Guild organizes the presentation of the projects developed at the scriptwriting workshop for live-action and documentary series in 2021, under the mentorship of Snjažana Tribuson, Ognjen Sviličić, Saše Ban and Miroslav Sikavica.

As part of the Co-production Day of July 18, 2022, a meeting of representatives of film centers, industry representatives and all film professionals is organized in order to exchange experiences, improve and strengthen commercial links and to initiate new collaborations.

The program also includes round tables Protecting and promoting cinematographic heritage, Minority co-productions and Cooperation of the Cinematographic Centers of the Regionas well as the round table Committed cinema today: Why do we make films? and the Pula Academy, an educational program aimed at students but open to all accredited professionals.

The wrath of God (Croatia, Bosnia and Herzegovina)
Directed by Kristijan Milic
Produced by Eurofilm

The stigmata (Croatia, Bosnia and Herzegovina)
Directed by Zdenko Jurilj
Produced by Eurofilm
Co-produced by Kadar

What to do (Croatia)
Directed by Goran Devic
Produced by 15art

Presentation of the scenario of the Live-Action series:

Presentation of the scenario of the documentary series: