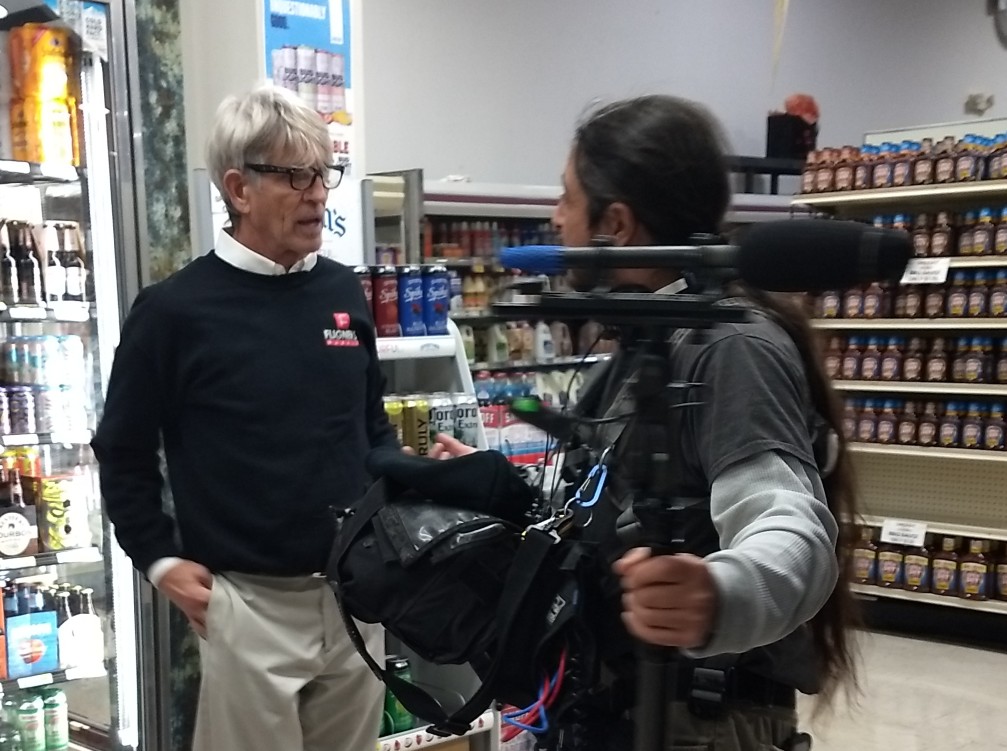 Lorain County is no stranger to the big screen, but the latest film in production is a testament to the fact that Lorain County towns such as Lorain and Elyria are ready to join in the conversations for more feature films to be shot. in these places.

â€œThe Company We Keep,â€ an original film written and directed by Jeff C. Edelstein, began production on October 31 and is scheduled to end on November 22.

It stars Hollywood notable Eric Roberts enjoying his time in Lorain, and it shows on social media with all the photos he takes with the people of Lorain County being shared on social media.

Part of the film is shot at Lorain’s longtime market, Fligner’s, which the owners tout as the longest full-service meat counter in the United States.

Because Fligner’s has been in Lorain for over 90 years, it was more than fitting that part of the film be shot there.

There was a camera crane, lenses in protective boxes, a microphone boom, and a monitor to watch, but generally they left the store untouched.

And there are many other monuments in Lorain where producers can shoot films.

The trip to Ohio is Roberts’ first in Buckeye State.

Now, if Roberts’ name is unfamiliar, his face and voice probably is.

The Oscar nominee, who is the older brother of Oscar-winning actress Julia Roberts, has worked on numerous screens since the 1970s, amassing over 600 credits, including blockbusters, indie films, animated films , television series, animated series, short films and student films.

Roberts, originally from Mississippi, also has a daughter, Emma Roberts, who, you guessed it, is an actress.

Lorain County’s Liam Gomez, another actor on “The Company We Keep,” almost has a credit.

The youngster’s parents, Sarah Zientarski and Kevin Gomez, said their son is good at math and plays hockey in Elyria’s youth program.

Liam is a piano and vocal student at Rock Town Music Academy, where school founder and singer-songwriter Jaclyn Bradley suggested the role.

Normally a shy boy, Zientarski said Liam exploded with happiness when asked to perform on camera.

This is the first time that Liam has played a fictional role.

Liam didn’t have a scene that night, but came to add another autograph to the cast and crew’s signatures on the cover page of his script.

Lorain-based actor Kenny Santiago Marrero performs on camera and has served as a production assistant for several locations around the city and county of Lorain.

But in this movie, Roberts plays the role of the manager.

At the supermarket, Roberts looked like any other employee in khaki and a black Fligner-branded sweatshirt with “How can I help you today?” Â»Printed on the back.

In one scene, Roberts speaks with two police officers looking for Carter.

In the story, Carter suffered abuse as a child and went on to work in the market.

It’s a traumatic and moving story, but it could raise awareness of the effects of child abuse.

On set, Roberts acknowledged that it is difficult to speak casually about child abuse, as it gives the impression that child abuse is cut off and risks dispelling the importance of the topic.

But we hope people pay attention to the film and its message about child abuse.

Even Marrero said that while reading the script, “it’s going to make your hair stand on end, some things, and the fact that it really happened.”

Marrero added that the film is actually based on real events that once took place, and that for him is very disturbing.

The Southern California resident also loves bridges and Marrero had hoped to show him the Charles Berry Bascule Bridge, now the second largest of its kind in the world.

“The Company We Keep” is not the first feature film to be shot in Lorain County and will certainly not be the last.

Lorain County has several locations where film crews can produce films, from Lake Erie and the Black River to the north, to Cascade Park in Elyria or south to the Lorain County Fairgrounds in Wellington.

We hope to see more of Lorain County in future films.