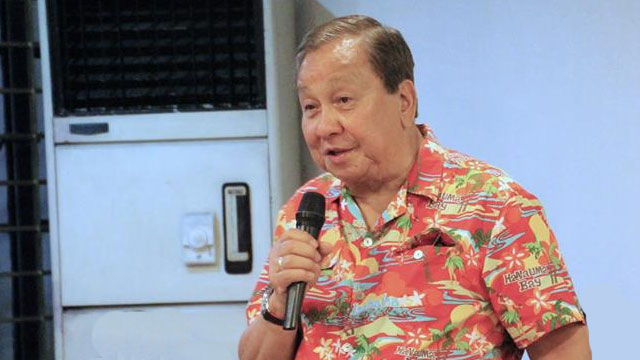 (SPOT.ph) Representative of the BUHAY party list and principal deputy leader of the minority JosÃ© “Lito” Atienza Jr. is lobby the Film Development Council of the Philippines to review screenplays for historical films for approval to ensure their quality and accuracy so that they can benefit from the appropriate tax incentives.

This initiative is apparently driven by his annoyance to the recently released Jerrold Tarog movie Goyo: Ang Batang Heneral, which showed Gregorio del Pilar dying from a gunshot to the neck, a death that apparently did not live up to Atienza’s expectations of glorious heroic deaths. He expected del Pilar to have died astride his horse, charging nobly in battle. But this death is largely a fictionalized version propagated by the Americans; the account of the actual incident is corroborated by the aide-de-camp of Del Pilar, Vicente Enriquez and Telesforo Carrasco, a Spanish lieutenant in Emilio Aguinaldo’s army.

Atienza acknowledges that several sources were consulted to ensure the historical accuracy of the film. However, Atienza said Filipinos need to be â€œinspiredâ€ by our heroes. The scene of Atienza’s death by Del Pilar in the film was so furious that he said he swore, stood up and told his wife they had to leave the theater.

Atienza also said historical films should portray the heroism of Filipinos and, if necessary, that adjustments should be made to amplify the heroism and reduce the suggestion of cowardice, a suggestion that goes far beyond creative license. and could arguably be considered propaganda.

The attempt to glorify the history of the Philippines in the face of real historical facts is not lost on the people of the film industry. Film producer and screenwriter Moira lang commented “isa itong bangungot, “ referring to state approval of scripts prior to production.

The same attempt to muzzle filmmakers was seen during martial law, when the Cinema Censors Council was created to regulate films and approve screenplays before the movies are shot.

When Book-to-Movie Adaptations Are Simply Different