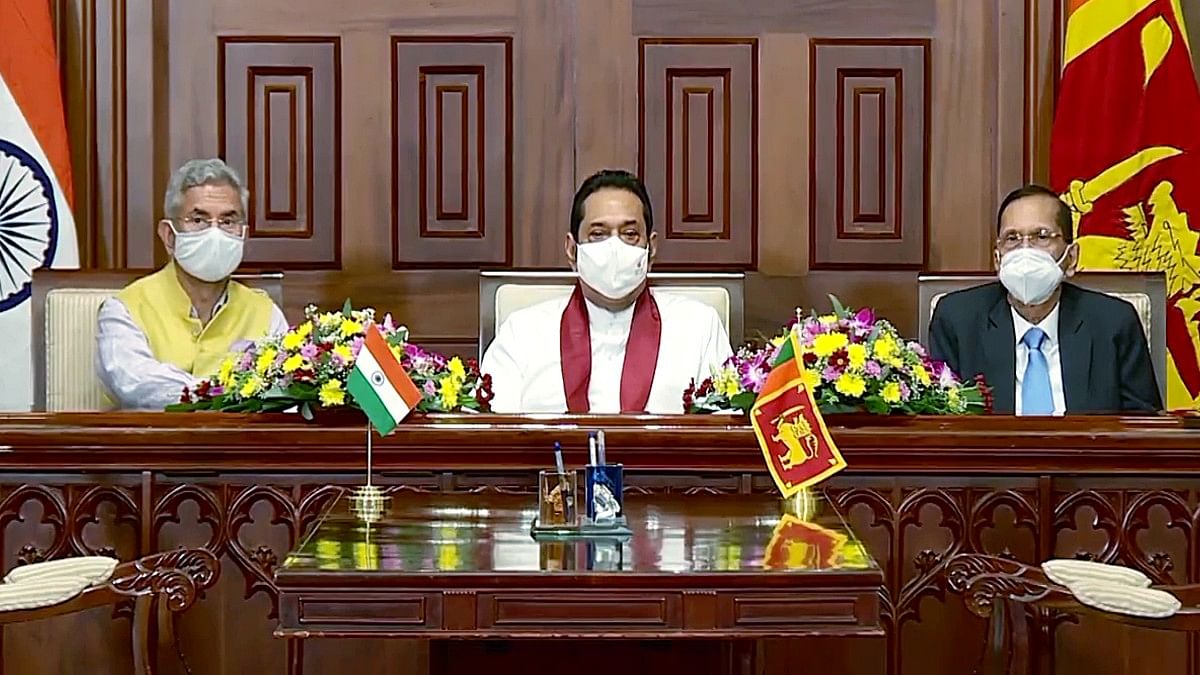 New Delhi: The rivalry between India and China in Sri Lanka has been going on for years, but the unprecedented economic crisis in the island nation has given it a new impetus. In recent months, New Delhi and Beijing have both done their utmost to help Colombo through loans, lines of credit and even drugs to provide surgeries, in hopes of gaining more influence in return.

The island nation is in the pangs food and fuel shortages, power cuts, insufficient supply of medicines and other items.

External Affairs Minister S. Jaishankar, who is currently visiting Sri Lanka, has met with almost all of that country’s top political leaders in the space of two days, while helping to address some Local issues the. He met with Sri Lankan President Gotabaya Rajapaksa, Prime Minister Mahinda Rajapaksa, Finance Minister Basil Rajapaksa and Fisheries and Aquatic Resources Minister Douglas Devananda.

Earlier this month, New Delhi provided Colombo with a $1 billion line of credit (LoC) for buy food, medicine and other essentials.

While Jaishankar visited Sri Lanka mainly to attend the Bay of Bengal Initiative for Multisectoral Technical and Economic Cooperation Summit (BIMSTEC) and secure the country maritime domainhe even tried to meet their daily needs, to convey the message that India truly believes in “Neighborhood First”.

China is trying to “draw maximum benefit from this crisis” and “follow up” on the measures announced by India, diplomatic sources told ThePrint.

The sources said that while New Delhi mainly provides lines of credit to help Sri Lanka, China provides loans, which it will be difficult for Sri Lanka to pay later.

On Tuesday, Jaishankar stepped in to resolve a crisis at one of Sri Lanka’s renowned hospitals — Peradeniya Hospital — where all the surgeries had to be stopped due to drug shortages.

Disturbed to see this news. I request High Commissioner Baglay to contact and discuss how India can help.@IndianSL #Neighborhood first https://t.co/jtHlGwxCBL

The Indian High Commission then contacted the Vice Chancellor of Peradeniya University to understand “their drug needs to continue regular and scheduled surgeries”.

The High Commission contacted Professor Lamawansa, Hon. VC and the Dean of the Faculty of Medicine of the University of Peradeniya and asked to know their drug needs to continue regular and scheduled surgeries.

Jaishankar also visited the 1990 Suwa Seriya Ambulance Service in Colombo on Tuesday, which he said has answered 5 million calls so far.

It is heartwarming to visit the 1990 Suwa Seriya Ambulance Service in Colombo.

Impressed with your record and accomplishments: Answered 5 million calls to date.

India is proud to be your partner in saving lives. pic.twitter.com/1HNhTP75q7

“The Indian Foreign Minister assured the support of the Indian government to ensure economic stability in Sri Lanka, and reiterated that India understands the real problems of Sri Lanka as a close neighbor,” said the Ministry of Affairs. of Sri Lanka in a statement after Jaishankar’s meeting with his Sri Lankan counterpart GL Peiris.

As India tries to help Sri Lanka overcome the current crisis, it is also ensuring that its interests in terms of Tamil reconciliation and fishermen problems are dealt with efficiently.

During Jaishankar’s meeting with Peiris, the former was assured that the Sri Lankan government would work on the issue of Tamil reconciliation.

“Minister Peiris briefed Minister Jaishankar on the fruitful discussion that the President of Sri Lanka and the Government had with the Tamil National Alliance (TNA, the main Tamil party in Sri Lanka) last week, during which the President acknowledged the concerns of the people of Sri Lanka. North and East in terms of reconciliation,” the statement from the Sri Lankan Foreign Ministry said.

“Minister Jaishankar welcomed the positive developments that the Sri Lankan government has made to resolve the issues concerning the Tamils ​​in Sri Lanka and achieve (a) lasting solution,” he added.

During the BIMSTEC ministerial meeting, held on Tuesday, Jaishankar spoke about cooperation among all members in connectivity, maritime security and counter-terrorism.

“Ambassador Qi, while stating that China has signed more than 26 FTAs, said that finalizing the proposed FTA between Sri Lanka and China would greatly benefit the local Sri Lankan market and products. He also urged the Sri Lankan authorities to resume the 7th round of FTA negotiations at the earliest,” said a statement released after Qi’s meeting with Peiris last week.

The Chinese have also accelerated some of their small and medium projects there, including some road projects in the rural provinces of the Indian Ocean island.

He even donated 2,000 tonnes of rice worth $2.5 million to Sri Lanka last week to help tackle the country’s growing food crisis.

‘India can do more’

Sumith Nakandala, senior director of the Bandaranaike Center for International Studies, told ThePrint from Colombo that “India can do more” to help the country.

“Sri Lanka is in a state of major economic crisis. India has provided aid, but it is not enough. It is important to understand that India can do more. India’s helping hand at this time will strengthen our case. India will have to understand our problems. These are accumulated problems,” Nakandala said.

“We want India to speed up the projects it was given long ago. For example, the LNG (liquefied natural gas) project which was awarded to India and Japan in 2017. The plan was to develop three power plants with a capacity of 100 MW,” he added.

“If this project was operational today, we would not have faced such massive power cuts. Then there are long queues for food and medicine. India can help us through the Food Corporation of India and the SAARC Food Reserve.

Nakandala said China has also extended aid, “but they are loans unlike a line of credit.”

“We understand that countries have their own limitations and we need to make national arrangements in terms of cost of living adjustments, balance of payments, exchange rate management, etc.,” he added. .