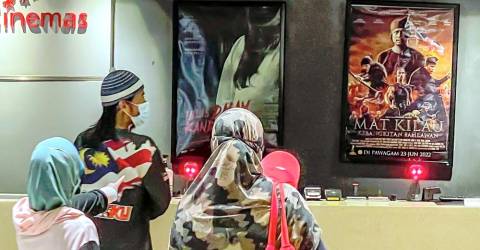 PUTRAJAYA: Actors in the country’s film industry must focus on local history as well as past and present struggles to ensure the industry thrives, the minister told the Prime Minister’s Department (Parliament and Law ) Datuk Seri Dr. Wan Junaidi Tuanku Jaafar.

He said it could help enhance the value and diversity of arts, actors and other related activities.

To this end, Wan Junaidi said the National Film Development Corporation Malaysia (Finas) could identify the critical history and struggles of ancient warriors that could be used as material for a film.

“It is able to reflect the real situation of Malaysian society in the country’s history, whether in the era of self-government, colonialism or communism,” he said in a statement. published today after meeting Finas’ Managing Director, Professor Dr Md Nasir. Ibrahim.

Finas, established on February 12, 1981, is an agency under the Ministry of Communications and Multimedia (K-KOMM) that serves as the national development agency for the film industry.

Following the example of the film ‘Mat Kilau: Kebangkitan Pahlawan’ produced by Studio Kembara Sdn Bhd which collected RM80 million in ticket sales, Wan Junaidi said that these films are capable of reaping huge profits through works based on history and struggle.

He described the film as a success that could lift the country’s film industry to a higher level.

To strengthen the country’s film industry, Wan Junaidi wanted Finas to provide detailed information on the needs of the industry, either for national development or to attract foreign investment.

He said it is to enable the government and businesses to help develop the country’s arts industry in terms of infrastructure, assistance and funding.

“Local businesses should take the opportunity to help this industry. I also hope that the government will diversify its assistance to include infrastructure building and attractive tax regimes for industry players, such as tax exemptions and the reduction of high government entertainment tax rates. state and local authorities,” he said.

Wan Junaidi also believes that the government should exempt foreign investors from taxes to encourage more international production houses to choose Malaysia as their main location for filming and infrastructure investment.

“Government agencies can play a role in facilitating production to attract foreign film companies to come to Malaysia to produce films and invest. It is capable of generating revenue and strengthening cooperation between local and international actors,” he said. — Bernama