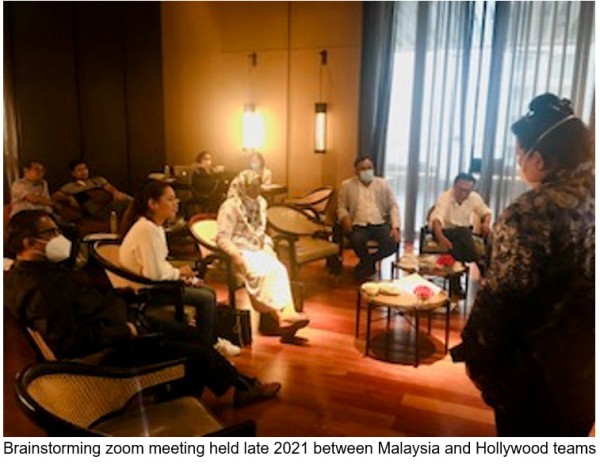 This new partnership will play a major role in creating a multi-level East-West collaboration involving talent from both sides of the Pacific.

Los Angeles, California – August 29, 2022 – SARL HIG ALDAMISA announced its five-year plan to produce multiple feature films in conjunction with a Malaysian production team, with first production commencing in the third quarter of 2023. HIG ALDAMISA is a Los Angeles-based company whose entities have produced and financed over thirty full-length feature films with a budget exceeding $300 million. The HIG ALDAMISA group works with the best talents in Hollywood, it has won forty international awards and received eighty nominations for various awards, including two Oscar nominations.

It’s an exciting journey for Team Malaysia according to award-winning filmmakers Dain Syed and Nandita Solomon. Tyler Posey while filming the film said alone, “I enjoyed meeting the Malaysian delegation in Los Angeles. I can’t wait to go to Malaysia, hopefully in the near future. “Alone” also featured Oscar winner Donald Sutherland and Malaysian and Asia-Pacific Award-winning actress Maya Karin, who attended the workshop, described her experience in Hollywood as fast, efficient and highly professional. .

Workshops and brainstorming sessions were held with Malaysia in late 2021. According to Sam Dean, these sessions incorporated cross-cultural narratives that will serve as models for future cooperation, bringing Malaysia movie production to new levels, while creating tourist destinations involving global celebrities. Sam Dean added that the plan includes expanding its film productions to other Southeast Asian countries.

“I strongly believe in the positive impact of the film industry on the tourism sector and I support the efforts of HIG Aldamisa to position our country among international film destinations. It is the perfect channel to introduce and introduce Malaysia to the eyes of the world,” said Dato’ Zainuddin A. Wahab, Managing Director of Tourism Malaysia, after attending the brainstorming workshop.

The recent visit of the State Trade Delegate to the Ministry of Finance in Malaysia last November underscored the need to enhance economic relations between the two countries through collaboration and partnership. HIG ALDAMISA and the Malaysian team are eager to contribute to this goal.

“We look forward to seeing these ventures come to fruition in the near future.” says William Anton, Vice President, Theme Space and Former Vice President, Paramount Pictures, who works with HIG on several animation and theme design projects.

Who will struggling households turn to after Britain’s crackdown on payday lenders? | Payday loans