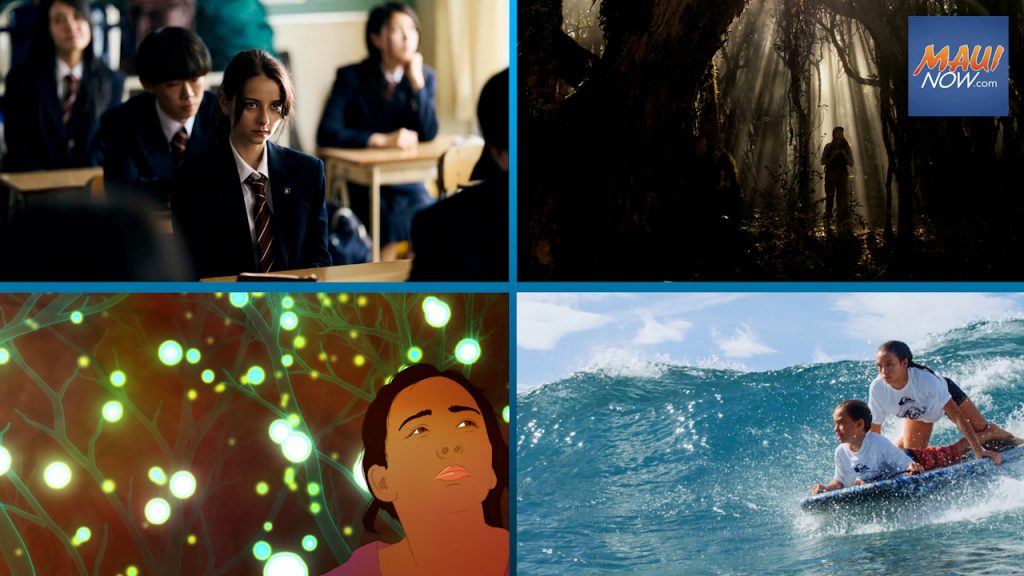 HIFF returns to Maui with three feature films and a selection of shorts, November 18-19: Maui Now

The Maui Arts & Cultural Center presents a return to Maui of the Hawaii International Film Festival (HIFF) showcasing three films and a screening of six short films shown at this year’s main festival at its O’ahu base.

All screenings will take place at the McCoy Studio Theater at MACC from Friday, November 18 through Saturday, November 19. Tickets go on sale online only Wednesday, October 25 at 10 a.m. on MauiArts.org.

Featuring films to be screened at the 39th Annual HIFF Main Event taking place November 3-13 in O’ahu, Maui’s selections represent some of the finest filmmakers from across the Asia-Pacific region.

Filled with insight and discovery, HIFF is dedicated to advancing understanding and cultural exchange among the peoples of Asia, the Pacific and North America by showcasing films from around the world. Each year, more than 50,000 attendees across Hawai’i experience the sounds and sights of filmmaking from approximately 45 countries. This cultural exchange of ideas, presented through the powerful medium of film, raises awareness of our similarities and our differences.

Through the Doggy Door revolves around the story of Sheldon Paishon, a talented surfer who was born and raised on the rugged shores of Oʻahu’s Westside. Far from an idyllic Hawaiian paradise, the community has been ravaged by drugs, poverty and the long reverberations of colonialism. When he was 12, Sheldon’s parents lost their home and the family was homeless, living in a tent for the rest of Sheldon’s teenage years. With a strong will to overcome all odds and live his dream of being a professional surfer, Sheldon struggles with the harsh reality of being homeless. Eventually he is taken under the wing of popular professional surfer Mason Ho, who recognizes his immense talent and helps guide him through a world he has seen very little. This film aims to inspire and spark a deeper conversation about the realities of homelessness, the fight against poverty in Hawai’i, and the importance of self-confidence and willpower.

Sarya has lived in Japan since the age of five. She pretends to be German to her friends, which is easier than telling the truth. In reality, Sarya’s parents are Kurds who traveled from Turkey to Japan as refugees. Additionally, she is responsible for her younger siblings while her father is at work. Despite the difficulties, the future looks bright and soon Sarya will go to college. A tender relationship develops with fellow employee Sota, and his own feelings begin to surface. All Sarya wants is a completely normal life. However, when her father’s asylum application is rejected, she is increasingly torn. A truly haunting film about the balance of a young refugee who searches for her own world while being caught between two others.

My Small Land, the directorial debut of Emma Kawawada, a mentee of acclaimed Japanese author Hirokazu Koreeda (Nobody Knows, Shoplifters), is a nuanced film that explores issues of xenophobia and Japan’s inscrutable immigration laws, while telling a heartfelt story about the ups and downs of coming of age, falling in love and finding each other.

HIFF presents a selection of environmentally focused short films from Hawai’i, focusing on environmental stewardship right here at home. All of these shorts will also be screened online as part of the Green Screen Shorts Competition program and will be eligible for the Deep Blue Environmental Shorts Award from the US Department of Energy’s Water Power Technologies Office.

THE ARTICLE CONTINUES UNDER THE AD

For those who carry the sea like a Malo | 5 mins – Director: Richard Hamasaki

In the heart of Maui | 7 mins – Director: David Ehrenberg

Biologists Erika Kekiwi and Chris Warren are working to save rare and endemic forest birds in Haleakalā National Park, showing what would be lost if humans don’t act and stop this extinction event. A National Park Service film.

THE ARTICLE CONTINUES UNDER THE AD

The island of O’ahu is covered in coconut palms, but for fear of liability the vast majority of these sacred trees have been stripped of coconut palms. The grassroots movement, Niu Now, is on a mission to restore the “niu,” or coconut, as a staple food crop in Hawai’i and to spread the indigenous wisdom of “aloha ‘āina”: to love the land and serve the people.

A non-profit organization’s mission to empower youth through ocean-based education, with the goal of cultivating environmental stewardship and developing future community leaders. Traveling to Brazil for their first international clinic, participants quickly realize the many ways the ocean connects us rather than divides us.

Over the past 25 years, thousands of Maui residents and visitors have come to volunteer at Auwahi, a legendary forest located on the lee side of Haleakalā Volcano. Through their efforts, Auwahi has evolved from a “museum forest,” a handful of age-old ancestral trees in a cow pasture, to a vibrant young forest where a vital part of Hawaii’s biota takes refuge.

As La’i Bertlemann prepares to graduate from high school, she wonders whether she should take a full scholarship to a top mainland university or stay home in Hawai’i to study her culture and spending time with his aging grandfather. As the direct descendant of a long line of Paniolo, or Hawaiian cowboys, she has the unique opportunity to carry on her family’s legacy, but the mainland has its own lures. From her last high school rodeo competition to her family’s annual hallmark day on their ancestral lands, The Last Rodeo explores what La’i stands to lose if she decides to leave.

The Story Of Everything, a theatrical performance written and designed by Hawai’i Poet Laureate Kealoha, and now a film produced and directed by Engaging the Senses Foundation, illuminates the intersection between science, the environment, the arts and the full awareness. The film explores humanity’s rich and diverse explanations for the origins of life and presents powerful solutions for the continued health of the planet and all beings on it.

At a time when we are aware that racism constantly exposes people of color to a reduced quality of life and the world itself is at risk due to climate change, a project focused on light, solutions and the transmission of hope is a cause for celebration. The Story Of Everything incorporates poetry, dance, music, art and special effects to condense 13.7 billion years into one hour and 45 minutes that poses and answers two questions that defy humans from the very beginning: “Where do we come from?” And even more important: “Where can we go next?” »

Tickets to the Maui screenings are $12 plus applicable fees and are available online only at MauiArts.org. The MACC box office is not open for window transactions until the day of the show. It is open to inquiries only by email to [email protected] and call 808-242-7469 Tuesday through Friday, 10 a.m. to 4 p.m. The windows will be open for call taking and on sale day at 4:30 p.m. on Friday, November 18 and 11 a.m. on Saturday, November 18. 19.

Not all movies are rated and movie titles and broadcast times are subject to change. For more details on HIFF and this year’s films, go to https://hiff.org/.

Reading FilmFest to present films from here and elsewhere

CBA and Thread Together team up to support flood-affected communities