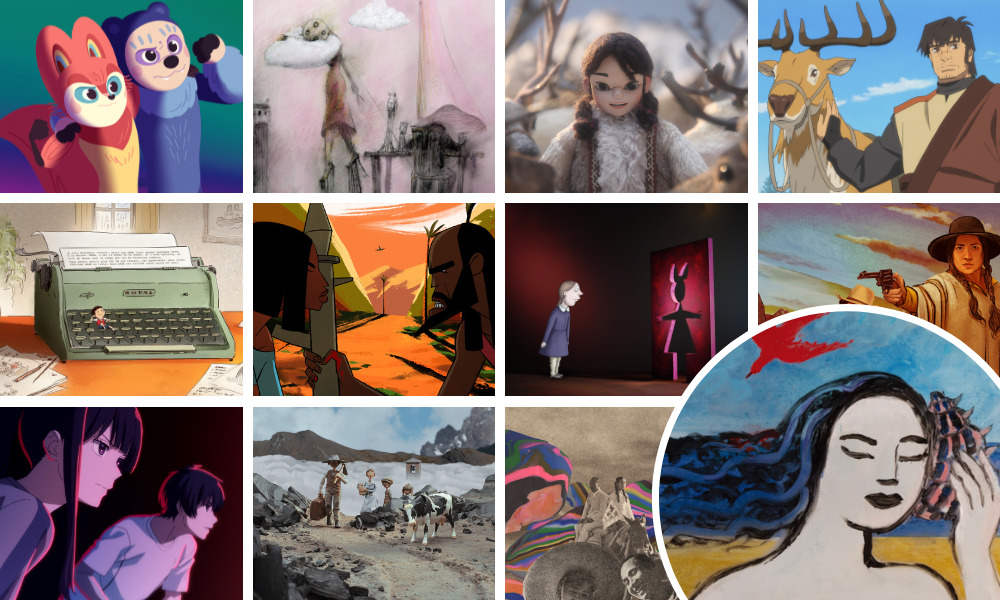 The 2022 Bucheon International Animation Festival (biaf.or.kr) has lined up 11 animated features for this year’s competition, once again expanding the category that has grown year on year. BIAF2022 will be held from October 21 to 25 in the South Korean city.

This year’s selections come from several continents, with Japan and France being the most represented, each with three films produced or co-produced in these countries.

Little Nicolas – Happy as can be
Amandine Fredon, Benjamin Massoubre | France/Luxembourg
Somewhere between Montmartre and Saint-Germain-des-Prés, Jean-Jacques Sempé and René Goscinny lean over a large white sheet of paper and bring to life a mischievous and endearing boy, Little Nicolas. From games and fights in the schoolyard to summer camp pranks and camaraderie, Nicolas enjoyed a joyful and fulfilling childhood. (Trailer)

The deer king
Masashi Ando & Masayuki Miyaji | Japan
In the in the aftermath of a brutal war, ex-soldier Van toils in a mine controlled by the empire in power. One day, her lonely existence is turned upside down when a pack of wild dogs carrying a fatal and incurable disease attacks, leaving only Van and a young girl named Yuna as survivors. Finally free, the couple seeks a simple existence in the campaign but are pursued by nefarious forces. Wanting to protect Yuna at all costs, Van must find out the true cause of the the plague ravages the kingdom and its possible remedy. (Read more | Trailer)

Dozens of Nords
Koji Yamamura | Japan/France
Dozens of Nords is the feature debut of Yamamura, an Oscar-nominated independent animator and picture book author. The film is a hand-drawn journey that proves the beauty of motion as the director seeks to reclaim fragmented memories in the aftermath of the 2011 earthquake.Trailer)

My love affair with marriage
Sign Baumane | Latvia/United States/Luxembourg
From an early age, songs and fairy tales convince Zelma that Love will solve all her problems as long as she lives up to society’s expectations of how a girl should act. But as she gets older, something is wrong with this conception of love: the more she tries to conform, the more her body resists. A story of female inner rebellion. (Read more | Trailer)

Mother land
Jaebeom Park | South Korea
A precocious girl, Krisha is a descendant of the Yates, the nomadic tribe of the tundra. To save her sick mother, she listens to the words of a shaman and goes to the confines of this frozen world in search of a red bear; but a Russian army captain and a notorious hunter are also on the creature’s trail. (Trailer)

Nayola
Jose Miguel Ribeiro | Portugal/Belgium/Netherlands/France
Nayola follows three generations of women’s experiences, affected by the civil war in Angola. The former Portuguese colony won freedom in 1975, but only after a brutal 25-year conflict fueled by the Cold War. At the height of the war, Nayola goes in search of her missing husband. Decades later, she still hasn’t returned and her daughter has become a rebellious teenager and subversive rapper, causing her grandmother to fear police reprisals. (Trailer)

No dogs or Italians allowed
Alain Ughetto | France/Switzerland/Italy/Belgium/Portugal
In the early 20th century, a young man named Luigi leaves his home in Ughettera, Italy, crossing the Alps to France where he falls in love and starts a new family. Ughetto creates this authentic piece of family tradition with his own hands, bringing his grandfather’s story to life. (Trailer)

Quantum Cowboys
Geoff Marslet | UNITED STATES.
Quantum Cowboys posits that all humans and animals have their own universes based on their own memories and history. In 1870s Arizona, hapless cowboys Frank and Bruno hit the road with a wise girl named Lind to find a mysterious musician. As they encounter diverse people across small towns, bars, and deserts, images of each individual universe revolving through time and space merge into existential chaos.

Perlimps
Ale Abreu | Brazil
Much like Abreu’s previous works, such as The boy and the world (2013), Perlimps recreates on screen a magical appearance with beautiful colors and the stylized illustration of the film’s Enchanted Forest setting, where Claé and Bruô, secret agents of the enemy Kingdoms of the Sun and the Moon, must overcome their differences and unite their forces to find the ‘Perlimps’ and save their land. (Read more | Trailer)

Silver bird and rainbow fish
Lei Lei | China/USA/Netherlands
The chaotic story of the Chinese family is told in a bold visual world of propaganda imagery, surreal collages and pop-art animation, traveling between dream and reality. The loss and struggle are told in five chapters from the perspective of young Jiaqi, much like going through a photo album. (Trailer)

The tunnel to summer, the farewell exit
Tomohisa Taguchi | Japan
Kaoru Tono has heard a rumor: the laws of space and time mean nothing to the Urashima tunnel. If you find it, as you walk, you will find your heart’s desire on the other side…in exchange for years of your own life. Determined to bring back his deceased younger sister, Kaoru finds the passage. But when he returns to explore it, he discovers that he has been followed by the mysterious new girl in his class, Azu. Based on the sci-fi/romance light novel by Mei Hachimoku and illustrated by Kukka. (Trailer)