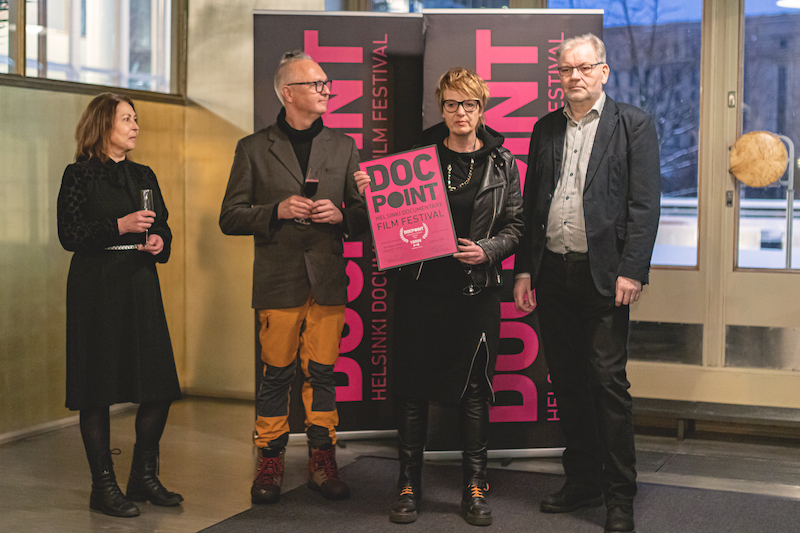 Best documentary films of the year rewarded in DocPoint

The best national and international film was awarded in the DocPoint competitions with the DocPoint-Yle-award, worth 5,000 euros. In addition, the international jury awarded two special mentions. Audiences voted for their favorite film in The Audience Ballot funded by The Documentary Guild.

The winner of DocPoint’s national competition was Susanna Helke’s film TIME RUTHLESS – CARE SONGS. The darkly humorous film explores the state of Finnish public care where employees try to survive in conditions where efficiency and profit have become the most important values. The film was produced by Road Movies Oy.

The international jury appreciated the creativity of the film’s staging and its depth of humanity. The challenges of public care are not only current issues in Finnish society, but the challenges of an aging population apply worldwide.

“It’s such a great honor that it makes my organs tremble!” To think that such a professional international jury received the film in this way is amazing. I wondered beforehand, how this film appeals to those who are not from Finland. How do we take care of each member of society, how do we take responsibility? I am extremely happy that these themes have also opened up to the international jury,” commented director Susanna Helke.

Eight new Finnish feature films took part in the national competition. Inka Purchased‘S GOLDEN LAND received the special mention of the National Competition. The film was produced by Napafilms. The film tells the story of Finnish-Somali Mustafa who returns to Somalia with his family to open a mine on his family’s land.

The winner of the international competition comes from the Moscow metro

WHERE ARE WE HEADED by Ruslan Fedotov won the DocPoint international competition. Fedotov’s film follows people in the Moscow metro offering a current sample of Russian society and people.

The jury was impressed with how Fedotov’s film created a colorful portrait of contemporary Russian society. The film forces us to ask ourselves again and again: “Where are they going? – not only about the route of individual travelers passing through the largest underground metro in Moscow, but also as a political question, about Russia itself.

DocPoint is up and running. The festival will continue until Sunday, February 6.