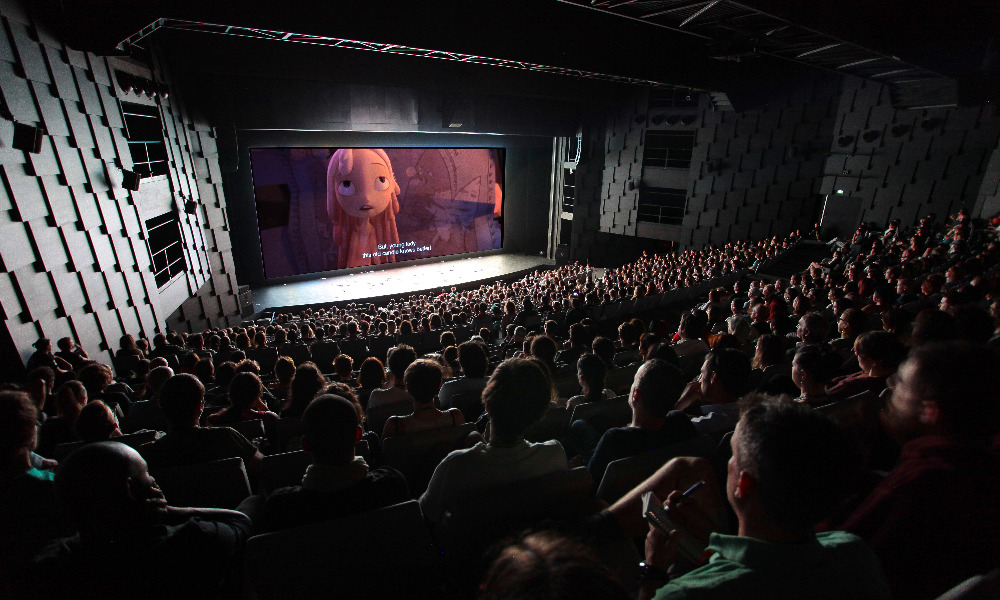 Participants are set for a truly triumphant return to an all-live edition in 2022 Annecy Festival. During today’s press conference at the CNC, festival director Mickaël Marin and artistic director Marcel Jean presented the highlights of the 46th edition to be held from June 13 to 18 and announced the Official Selection of features footage.

“I would like to remind you of the state of mind in which we have worked in recent months. I know that we were all keen to find ourselves fully, totally, to reconnect with the soul of this festival made of encounters and sharing, to bring the effervescence of cinema back to life,” said Marin. “We imagined this year’s festival as a fireworks display of creativity and diversity to showcase the vibrant power of a cinema we are so proud to serve.”

Jean adds: “The Festival’s 2022 selection is diverse and surprising. It testifies to the vitality of animation and the extraordinary development of world production in recent years. The qualities and quantities are such that you almost feel cramped in the biggest animation festival in the world!

Tough decisions were made to narrow down the hundred or so feature films submitted for consideration; Finally, Jean and his committee selected 10 titles for the Feature films in competition program (in alphabetical order):

Blind willow, sleeping woman by Pierre Foldes
Miyu Productions, Cinema Defacto (Canada, France, Luxembourg)
“This may be the most anticipated animated feature film of the year! Loosely adapted from several short stories by Haruki Murakami, the film is utterly unique, its structure honoring the traits of the short stories that inspired the filmmaker. —Marcel Jean

Charlotte by Eric Warin & Tahir Rana
January Films, Walking the Dog, Les Productions Balthazar (Belgium, Canada, France)
“The all too short life of the German Jewish painter Charlotte Salomon, who died at 26 in Auschwitz, is portrayed in this gripping film which explores an exceptional artistic temperament carried away by the whirlwinds of History.”

Goodbye, DonGlees! by Atsuko Ishizuka
Photos of Kadokawa (Japan)
“Goodbye DonGlee! released in Japan in February is both a story of friendship and a rite of passage. Funny, moving, close to nature, a film that will delight anime fans.

The house of the lost on the cape (Misaki no Mayoiga) by Shinya Kawatsura
DAVID Production (Japan)
“A meticulous adaptation of Kashiwaba’s novel, this feature film brings back memories of the tragic 2011 earthquake and subsequent tsunami. Although the composition of the first minutes of this film may seem relatively conventional, the sequel is definitely full of surprises with segments bordering on experimental.

The Island by Anca Damian
Aparte Film (Romania, France, Belgium)
“With her unique and always surprising style, Anca Damian, winner of the 2012 Feature Film Crystal, freely revisits the myth of Robinson Crusoe, offering the viewer a dive into his baroque universe.

Little Nicolas – Happy as can be by Amandine Fredon & Benjamin Massoubre
Bibidul Productions, Onyx Films (France, Luxembourg)
“Using animation to redraw Sempé’s features and add color to the artist’s drawings was certainly a big challenge. A challenge taken up by a talented team that has never chosen the easy way and that makes us feel at home with the verve of Goscinny and the agility of Sempé. A great popular film that we are convinced will easily bridge the generation gap! »

No dogs or Italians allowed by Alain Ughetto
Les Films du Tambour de Soie (France, Italy)
“Jasmine was the revelation of the 2013 Annecy Festival. Today, almost 10 years later, Alain Ughetto returns with a film that once again draws deeply on autobiography, a film in which the narrative device is once again built on the representation of the film’s production resources. The Annecy Festival is delighted to reconnect with this too rare author.

My love affair with marriage by Sign Baumane
The Marriage Project, Locomotive Production, Antevita Films (USA, Latvia, Luxembourg)
“One of the great forces of contemporary feminist animation, Signe Baumane offers us here a second feature film pursuing an approach that is both singular and coherent. It’s just as intimate and funny, not to mention the joy brought to us by the songs interspersed throughout the story.

­Nayola by Jose Miguel Ribeiro
Praça Filmes (Portugal, Belgium, Netherlands, France)
“Political and social, José Miguel Ribeiro delves into Angolan history to tell the destiny of three women from the same family, a tribute to the struggle of brave Angolan women whose lives are marked by the violence of history. He This is a very successful transition from short to feature film formats by a renowned short film director.

Unicorn Wars by Alberto Vazquez
Abano Producións, Uniko Estudio Creativo, Autour de Minuit, Schmuby Productions (Spain, France)
“Prolific and gifted, the Spaniard Alberto Vazquez gratifies us with his second feature film, so striking by its visual opulence, its generous staging and its originality. A pleasure not only for the eyes but also for the spirit!

There is also 10 movies competing in the reverse shot Category:

Aurora sunrise by Inna Sahakyan
Gebrüder Beetz Filmproduktion, Bars Media, Artbox Laisvalaikio Klubas, VS! (Germany, Armenia, Lithuania)
“In this impeccably directed animated documentary by Inna Sahakyan, silent film star Aurora Mardiganian comes to life to tell the story of the genocide she survived. It is a work that draws its breath from the winds of history. —Marcel Jean

Chun Tae-il: a living flame (Tae-il-i) by Jun-pyo Hong
Myung Films (South Korea)
“It’s a film that takes us to the heart of the labor struggles of the tailors of Seoul. Classically composed, this moving social drama draws its source from the true story of one of the most emblematic figures of the labor movement.

Dozens of Nords (Ikuta no Kita) by Koji Yamamura
Yamamura Animation, Miyu Productions (France, Japan)
“A regular at the Festival, Koji Yamamura gives us a contemplative and enigmatic first feature that builds a languorous fascination while its neat graphics unfold subtly. A film to discover for sure.

Home is somewhere else by Carlos Hagerman & Jorge Villalobos
Brinca Animation Studio, Shina Global (USA, Mexico)
“Another animated documentary centered on the destinies and dreams of young Mexicans who emigrated to the United States. Three stories with as many graphic and technical styles, a film of burning relevance.”

Khamsa – The well of oblivion by Khaled Chiheb
D-CLIK (Algeria)
“What a joy to welcome an Algerian feature film to this competition for the first time! Tranquil, contemplative and almost esoteric, Khamsa sometimes recalls Laloux and Laguionie Gwen and others… In the end, the result is eminently personal and promises a bright future for North African animation.

My Grandfather’s Demons by Nuno Beato
Sardinha Em Lata, Marmitafilms, Caretos Film (Spain, France, Portugal)
“A real plunge into the family romance, My Grandfather’s Demons surprises by its passage from one technique to another, as well as by the density of its discourse on the roots and the impact of these on our social relations.

­­­The other shape (The other shape) by Diego Guzman
Hierro Animation, Smith & Smith (Colombia)
“This year, the honor of representing South America in the Contrechamp category goes to Colombian Diego Guzman. He offers us a futuristic film without dialogue, an intriguing journey into a hallucinated world.

Silver bird and rainbow fish by Lei Lei
C Ray Studio, Chinese Shadows (USA, Netherlands)
“Chinese artist Lei Lei is back, with this bountiful feature film in which he explores his family past, creating a kind of gigantic surreal collage sprinkled with references to pop art. Presented for the first time in Rotterdam, Silver bird and rainbow fish is one of the most singular objects of the Annecy 2022 selection.”

­Quantum Cowboys by Geoff Marslett
Fit Via Vi (US)
“Now here is a very strange western in which the director uses rotoscoping and adds elements of time travel. A revelation for the selection committee and a film that we want to share today with festival-goers.

Yaya and Lennie – Walking Freedom by Alessandro Rak
Mad Entertainment SpA (Italy)
“For his third performance in competition at Annecy, the Italian Alessandro Rak returns with a light film, an ecological science fiction fable. On time Yaya and Lenny it looks like he’s transposing Of mice and Men in a post-apocalyptic scene.

Of course, visitors to Annecy will also be treated to the latest Despicable installment of Illumination’s hit franchise with Minions: The Rise of Gru as the festival’s opening film. Marin and Jean also revealed more exclusive first looks and big-screen treats in the Screening events program, including:

Plus, festival-goers will get a taste of tomorrow’s next big animation sensation with previews of 15 projects is currently taking shape in the TEC program; including eight feature films, three series, three XR experiences and one short film.

Find out more and register to attend the Annecy Festival 2022 (June 13-18) on annecy.org. Participate in the show? Be sure to pick up our special 35th anniversary edition of Animation Magazine!