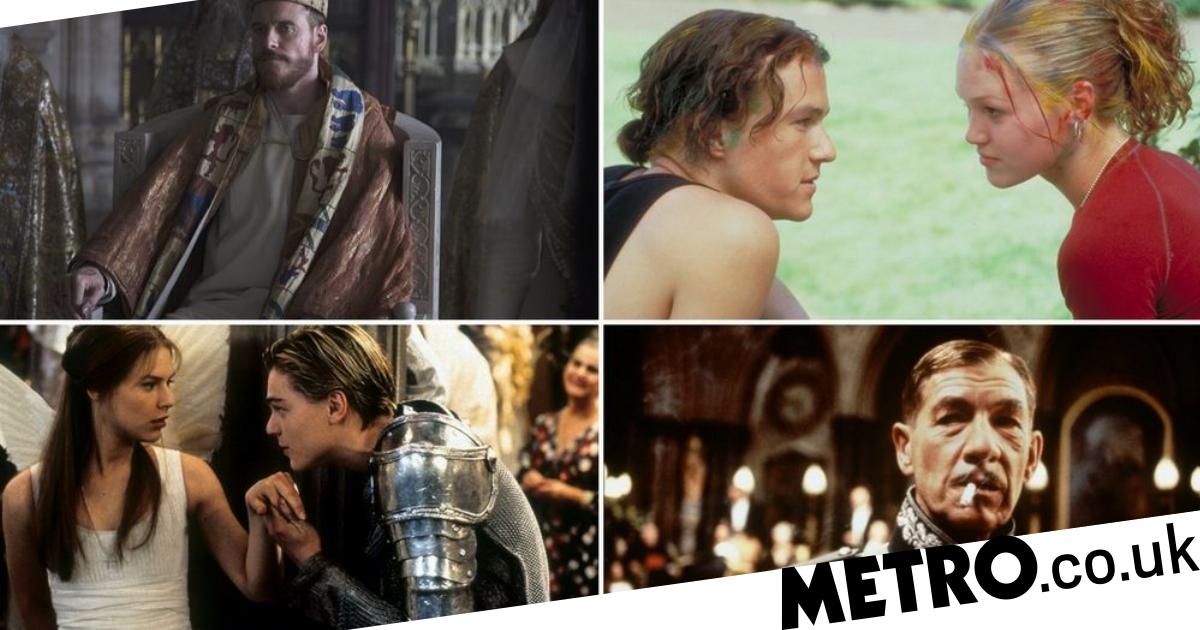 Much has changed since the Elizabethan era, including the attitude towards the works of Shakespeare, which has only grown in popularity over time.

He is the most successful writer in any language, with over 400 feature film versions of his plays.

To mark the occasion, here are 14 of the best movie adaptations that will rekindle your love for the Bard.

Set in 16th-century Italy, this tale of revenge, redemption, and love stars Jeremy Irons as the titular merchant and Al Pacino as the story’s tragic hero, the Jewish money lender Shylock. .

The performances are insanely good, but it’s Al Pacino who carries the film with an intense performance that makes Shylock both a villain and a weirdly likable character.

It’s not the best of Hamlet’s many adaptations, but Gibson brings the role to life, making it more entertaining than expected.

Not only is Justin Kurzel’s film visually stunning, it also captures the brutal, passionate and tragic spirit of Shakespeare’s Scottish play.

Fassbender and Cotillard are fascinating as a central couple devoured by ambition and psychosis.

Starring a host of Whedon regulars including Amy Acker, Nathan Fillion, Alexis Denisof and Clark Gregg, this modern day Much Teen is reinventing the game for a new generation.

Starring a baby-faced Leo DiCarprio and Claire Danes as cursed young lovers, Romeo + Juliet is everything you’d expect from a Baz Luhrmann production.

Bold, flamboyant, and straightforward, with an unconventional punk aesthetic that shouldn’t work as well as it does.

Marlon Brando is a fierce on-screen presence in Joseph L. Mankiewicz’s intelligent, emotional, and dramatic adaptation of Shakespeare’s play based on Roman history.

An absolute classic that’s just as watchable over 60 years later.

Kenneth Branagh’s second Shakespeare adaptation is a witty delight from start to finish.

With a star cast including Emma Thompson, Kate Beckinsale, Denzel Washington, Michael Keaton, Keanu Reeves and, of course, Branagh himself, you’ll be powerless to resist his lively charm.

Another adaptation of Branagh, Hamlet is a full and sumptuous saga that faithfully follows the original text.

Purists might have something to say about the high placement of this reimagining of The Taming Of The Shrew, but there’s no denying its fun, romantic, and far-reaching appeal to teenagers.

10 Things is not only a great adaptation of Shakespeare, but also a brilliant ’90s romantic comedy.

Proof that you can’t beat a classic.

British treasure Ian McKellen takes the place of usurper Richard, Duke of Gloucester, as he plots to undermine his rivals and claim the throne.

Set in the 1930s, Richard III is an intense and relentless adaptation of a ruthless Machiavellian dictator.

Over 400 years since Shakespeare wrote the play and such themes still resonate.

Powerful and moving, the first adaptation of Shakespeare directed by Kenneth Branagh is without a doubt his best.

Paul Scofield, Emma Thompson, Derek Jacobi, Judi Dench and Ian Holm star alongside Branagh, who attacks the title role with such enthusiasm you might think he was reincarnated King Henry.

The Japanese tale of King Lear by Akira Kurosawa is the very definition of the epic.

In the wake of an aging 16th-century warlord who abdicates and divides his kingdom among his three sons, Ran is cemented in film history as one of Shakespeare’s best adaptations to date.

It is a violent, poignant and timeless tale that deserves the title of cinematographic masterpiece.

Winner of 10 Academy Awards, including Best Picture, West Side Story is perhaps Shakespeare’s most iconic, celebrated, and adored adaptation on the big screen.

Natalie Wood and Richard Beymer are the two lovers caught up in a Hell’s Kitchen turf war between the Sharks and the Jets.

MORE: 10 Movies To Watch After Getting Dumped


MORE: Why The End Of The F *** ing World Is The Best Show You’ll Watch All Year


MORE: 8 Movies That Perfectly Portray The Heartbreak Of Losing A Loved One