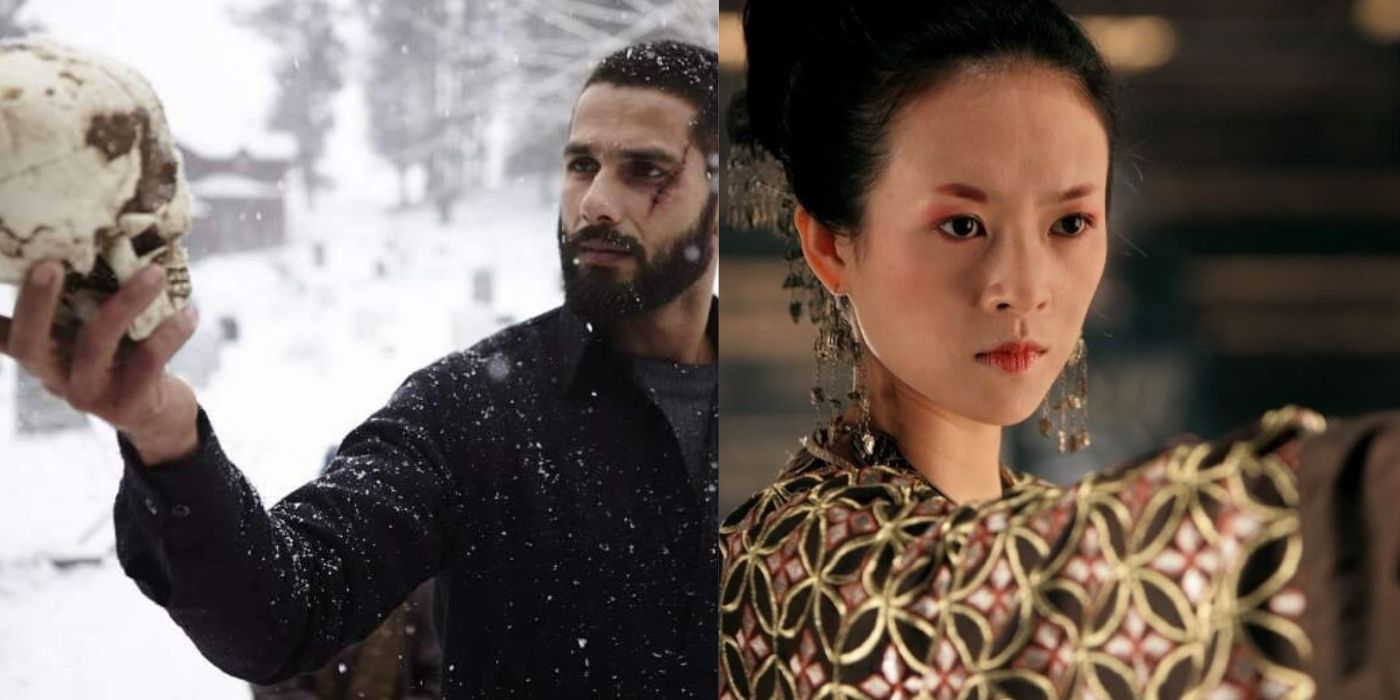 When it comes to classical English literature, William Shakespeare’s plays remain the ultimate classics. The bard’s contributions to the English language are invaluable, considering his plays, poems, and the many words and phrases he coined. But over the years, many non-English speaking countries have incorporated Shakespeare into popular culture through cinema.

Some of these films could be faithful adaptations while others were modern reinterpretations. While tragedies like Macbeth and Hamlet and romances like Romeo and Juliet were the most sought after, some historical pieces like Titus and Julius Caesar have also made their way into the field of foreign cinema.

In the place of Hamlet‘s Denmark, Vishal Bhardwaj’s Haider moves the scenery to the snow-covered Indian territory of Kashmir.

The main character (Shahid Kapoor) returns home after graduation, determined to find the reasons for his father’s disappearance. This prompts him to dive into a dark burrow of murky state politics in the region fueled by state-sponsored violence and insurgent activity. And then, as Shakespeare fans would guess, Haider’s uncle also turns out to be a shady figure. Haider is notable for retaining the hallmark elements of the play while also addressing the real socio-political realities of the time.

Caesar deve morire a.k.a Caesar must die draws on a docudrama approach to stage Shakespeare’s classic historical tragedy, Julius Caesar. The film comes out of a Roman prison as a group of prisoners prepare for a performance of the play.

The rehearsals add to the absurd hilarity of this French film, but as the final performance approaches, the prisoners themselves have different views on the political power game evoked in Shakespeare’s work. Caesar’s rise to power, his authoritarian control over the Senate and his eventual betrayal; such themes are addressed in this unconventional premise.

Japanese author Akira Kurosawa made three Shakespearean adaptations during his distinguished career, including Run was the most acclaimed and best known internationally. The plot stems largely from King Lear as he delves into the abdication of an aging warlord.

The only major difference is that the British monarch has divided his kingdom for his three daughters while Ran Ichimonji Hidetora (Tatsuya Nakadai) relinquishes his throne in favor of his three sons, giving way to an intense civil war. Aside from acting and Kurosawa’s epic scale, Run boasts an iconic score and stunning period costumes.

Kannaki replaces Antony and Cleopatra‘s Egyptian and places it in a local village in the state of Kerala. Notions of masculinity are explored as two friends (corresponding to Mark Antony and Octavius â€‹â€‹Caesar) engage in civil wars when one of them falls in love with Kannaki, a local doctor (corresponding to Cleopatra).

While the film softens the scale of the play’s Roman conquests, it still retains many of the speeches of the original play while fully fleshing out the conflicts between the characters. The director of the film Jayaraj had already directed Kaliyattam, an adaptation of Othello set in the world of local theatrical practices which once again deals with themes of male control over women.

Also published as The Legend of the Black Scorpion, Feast is a period drama set in an era of turbulent political division in 10th-century China. The story borrows elements from Hamlet, as several characters conspire against each other driven by revenge and lust for power. These conflicts then lead to the titular banquet where each player decides to carry out his intentions.

The film is notable for shifting the focus to Empress Wan from Zhang Zhyi (the film version of Gertrude) as she is a strong monarch in her own right and yet she is seen as a trophy for the male characters in the film. In fact, the “prince” loves her first to find his father to marry him. After the father’s death, the prince’s uncle controls both the throne and the empress. However, it turns out that it is the Empress who subtly exercises the highest powers.

Coming back to Akira Kurosawa, Throne of Blood captures Macbeth’s moral dilemmas and guilt perfectly. The storyline would obviously be familiar to viewers given the multitude of cinematic adaptations the play has received. But what sets him apart is relying on poetic visuals rather than dramatic monologues.

Just like Rashomon, Throne of Blood is based on strange and hazy environments that foreshadow the betrayal and violence that ensue. Frequent collaborator Toshiro Mifune plays the equivalent of Macbeth while Izuzu Yamada also delivers a powerful performance as Lady Macbeth. While the Coen brothers plan to adapt Macbeth for their next feature film, this would be a good time to revisit some of the play’s best adaptations, with the Kurosawa classic being a significant example that has aged well.

The Travel to Melonia is an animated adaptation of Storm, vaguely inspired by the play. The fantasy elements are kept for a lively, Disney-era style although, despite its visuals, the Swedish film also carries philosophical undertones that adults might appreciate more.

Source material characters like Miranda and Prospero are present albeit under slightly different circumstances. Therefore, it can be seen as both a rework and a spin-off of the play.

Before Haider, the Indian writer-director Vishal Bhardwaj had adapted Othello for a political drama called Omkara. And even before Omkara, Bhardwaj had established his grainy style with maqbool, an adaptation of Macbeth disguised as a gangster thriller.

RELATED: The 10 Best Irrfan Movies, According To IMDb

The film revolves around Maqbool, a right-hand man of a Mumbai underworld donation. Unknown to the latter, Maqbool also shares a secret affair with the mistress of the gift, Nimmi (Lady Macbeth). Playing mind games with Maqbool, Nimmi convinces Maqbool to usurp all the power for himself. While the film does not shrink from its share of violence, the essence lies in the toxic relationship between the two protagonists, hosted by Tabu and the late Irrfan Khan.

The Russian King Lear was sadly overshadowed by an English version of Peter Brook which came out around the same time (both shot in black and white). However, over the years the Russian film has also received considerable attention over the year, with many considering it to be one of the most superior adaptations in terms of a central character.

Most adaptations of this Shakespearean tragedy tend to focus on the old king’s family issues and his subsequent descent into insanity. Grigory Kozintsev’s take on the play also explains how the ruler’s wrong decision is a disaster for the entire kingdom he rules over.

The 1960s were a golden age for spaghetti westerns and Johnny hamlet mixed the Wild West with Hamlet. An underrated cult classic, the film is an engaging timepiece with its signature shootout sequences and atmospheric score. After the Civil War, Hamlet returns to his sleepy town to find his father murdered by a bandit. While seeking revenge, he unearths a greater conspiracy at hand.

As absurd as it may sound, genre tropes blend well with Shakespearean history, as revenge has often been a driving theme in luscious westerns as well as in Hamlet redone.

NEXT: 10 Shakespeare Screen Adaptations You Probably Haven’t Watched (But You Definitely Should)

Shaurya Thapa is an Indian freelance journalist who primarily writes on film, music and human interest subjects. When it comes to Screen Rant, he writes lists on a wide range of topics ranging from international movies to mainstream Netflix series and comic book trivia. He also hosts a podcast called â€œBhindiWire,â€ an Indian parody of IndieWire.