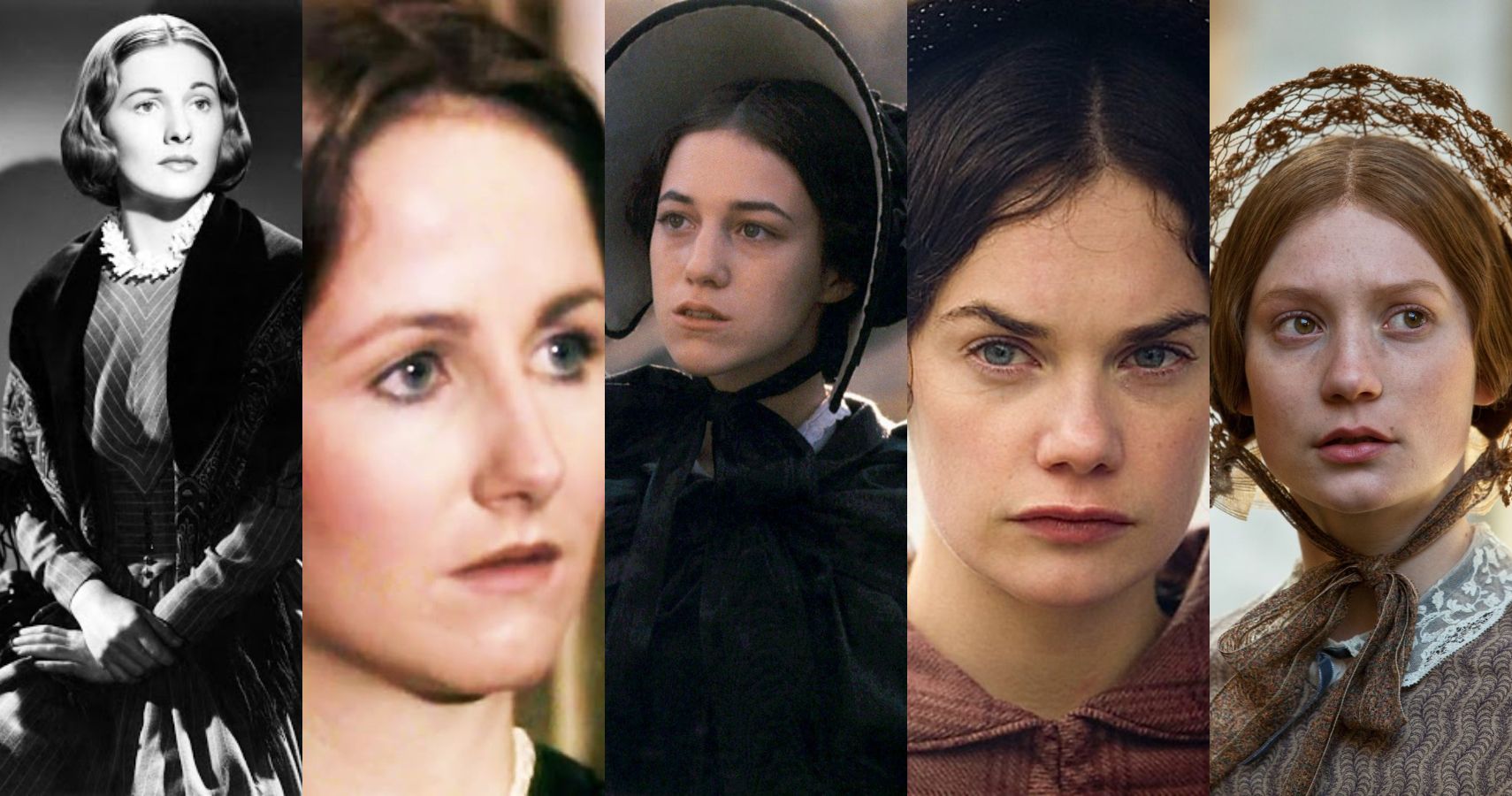 Charlotte Brontë’s most popular work, Jane Eyre, published in 1847, has been adapted many times and in many ways. The novel’s discussion of Christianity, social class, feminism and romance caused ripples during its publication that have lasted until today.

Although set in Victorian England, the story of a young woman’s journey to independence and love is timeless and people can still connect with this story today.

Updated May 17, 2021 by Kristen Palamara: While there haven’t been countless versions of Jane Eyre films like other works from the period of Jane Austen’s novels, the story has seen many different adaptations, from radio to television to passing through theatrical productions. Jane Eyre’s best adaptations for the screen, however, stack up well enough keeping the original novel in mind thanks to the strengths of the lead actors, with their performances giving each a distinctly timeless quality. Many of the best examples are also available to stream online, even classic adaptations and older versions of story mini-series.

This version, which aired on CBS, was limited due to time constraints and was shot on one set. This inevitably led to some major plot points being removed from the book, such as Jane’s time at Gateshead and Moor House.

The only time we see Lowood is during a brief scene at the start of the film where Jane indignantly states that she has been abused and will never return. The nicest elements of this adaptation are Charlton Heston as Rochester and the Ridiculous Woman in the Attic.

This adaptation leaves out all plot points that don’t take place in Thornfield. Much of the plot is out of place, possibly due to time constraints. For example, rather than being interrupted at the altar, Rochester is in the middle of his proposal when Mason barges in and demands that he tell Jane about Bertha.

Rochester is a creepy drunkard eyeing Jane, and Jane is much less straightforward than she portrayed in the novel. Mrs. Fairfax plays a bigger role here, serving as Rochester’s confidante about Bertha and helping her keep her secret. Some of the choices might seem a bit odd, but they’re entertaining nonetheless.

The 1934 version was the first ‘talkie’ adaptation. Monogram Pictures, a small production company at the time, did their best on a relatively small budget. Jane never visits her dying aunt or runs away to Moor House, but we can at least see her childhood in Gateshead and a brief scene in Lowood.

Here is another version where much of the story is changed; Jane is beautiful, talented and accomplished, while Rochester is kind and fatherly. If you like the story of Jane eyre but I wish it was more upbeat and less gothic, so this version might be the one for you.

Skipping Gateshead and going straight to Lowood, this version still manages to show us the rough beginnings of Jane’s childhood. For the sake of time, many plot elements are condensed. It’s the first version to show Jane’s time at Moor House, however, and it includes St. John’s proposal, both of which are important pieces of the story that are often overlooked by other adaptations.

This portrayal of the central romance between Jane and Rochester may not be brimming with passion, but Susannah York and George C. Scott capture some of the most central elements of their characters. Perhaps the biggest feature of this adaptation is an instantly memorable score by John Williams.

Everything except Jane’s trip to Gateshead to visit her dying aunt is included in this adaptation, which aired on television. Ciarán Hinds’ take on Rochester certainly stands out above the rest, and fans of the novel either love or hate this particular portrayal.

Hinds often chooses to play Rochester as aggressive and abrasive, frequently raising his voice to convey Rochester’s passionate nature. Jane and Rochester certainly match their physical descriptions in the book, both in terms of age and physical characteristics.

Of all the adaptations on this list, the 1983 version is by far the most faithful to the source material. Technically a TV series, this version spans 11 episodes and details the events of each chapter of the novel.

Due to the length of this adaptation, Jane and Rochester’s relationship has plenty of time to develop. If what you want from an adaptation is to see the novel literally translated on screen, this is definitely the version for you.

Charlotte Gainsbourg plays Jane as an adult. She is still passionate, but that side of her nature is tempered by her experiences at Lowood and her knowledge that, as a poor, single young woman, the world will not respond kindly to strong displays of emotion on her part.

Jane eyre is a gothic romance, but many adaptations treat it as a classic period piece and ignore the gothic elements. With long shadows and a stark black-white contrast, the places feel as they are described in the book. Lowood feels lonely and oppressive, while Thornfield truly feels haunted by secrets bordering on the supernatural.

RELATED: The 15 Best BBC Period Dramas Of All Time

Orson Welles gives a fantastic performance as Rochester, commanding every scene he’s in. The actor’s larger-than-life screen presence is perfect for the character and the story.

Here is another version which aired as a television series on the BBC. These four episodes cover everything in the novel, from Gateshead to Moor House. The scenes with Jane and Rochester vibrate with romance and mystery, and the chemistry between Ruth Wilson and Toby Stephens is undeniable.

Some changes are made to the dialogue in an effort to modernize the story for a new audience, and these changes may not work for everyone. However, between the wonderful performance of Ruth Wilson and the strength of the central love story, this version certainly does the Brontë story justice.

Each version has its strengths, but no other has captured the essence of the novel like the 2011 version did. Director Cary Fukunaga and screenwriter Moira Buffini make the brilliant decision to start the film with Jane running away from Thornfield. The rest of the story – Jane’s childhood, her romance with Rochester, her marriage attempt – is told through flashbacks. This improves the pace of the film and keeps the audience engaged.

While many actors have given these characters their own spin, this cast cannot be matched. Michael Fassbender is an almost perfect Rochester. Meanwhile, Judi Dench and Jamie Bell, along with the rest of the cast, also put on a great performance. Mia Wasikowska is the star, and perhaps the biggest strength of this adaptation is how it’s so clearly meant to be Jane’s story. Wasikowska’s performance is flawless in every scene, capturing the nuances and contradictions of the iconic character.

NEXT: 10 Movies To Watch If You Loved Emma

Madilyn Ivey is a reader, writer and film buff based in Seattle, Washington. She has been a hostess, barista and a bookshelf. She now works as a freelance writer for Screen Rant. She graduated from the University of Puget Sound.